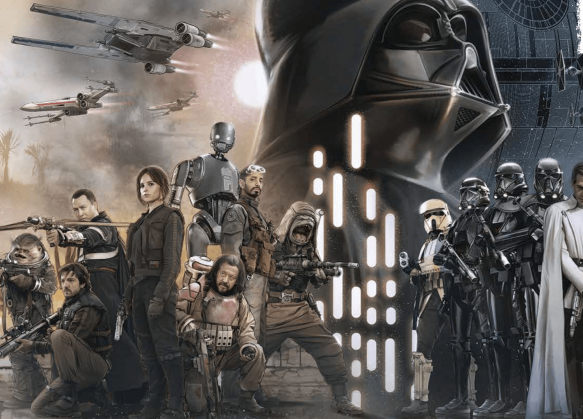 Last year, Disney reintroduced the Star Wars franchise to a new generation with “Force Awakens.” The positive of that was to see a new story on the big screen from the galaxy far, far away. However, my greatest disappointment was how so much time was spent rehashing material from the first movie instead of being its own thing. “Rogue One” has the upper hand because its a true prequel. This one has the advantage to expand on the universe while being a true link to “Star Wars.”

The main center of the story is a heroin named Jyn (Felicity Jones) who reluctantly assists a group of rebels to find out what the evil Imperial army is up to. I like how at first she doesn’t show interest but suddenly shows a sign of care once faced with what’s to come. Although she has little to no appeal in the space battles, her curiosity peaks when she learns how her father is in the mix of this. She is rebellious yet cunning. Honestly, I can’t think of a female character in the Star Wars universe that wasn’t highly determined.

Joining for the trip is an officer named Cassian (Diego Luna) whose only there to do his job. Tasked with the mission at hand, Cassian shares the same instincts but knows his limits. In one crucial moment, he’s told to assassinate someone vital to bringing down the Rebellion. Once in the moment, he hesitates questioning what value it would bring.  I like how he’s not stubborn to a new idea and at least there is no romantic pairing with Jyn. He’s an honest companion that questions his rights as a fighter.

Other rebels on the way range from a blind man who believes in the Jedi ways and his friend who is more militant. There’s sort of a ying and yang idea going on here as the two have different fighting methods. One is more resourceful on spiritual belief while the other is more into physical action. Its elements like these that make me wonder why “Force Awakens” wasn’t this clever with ideas like this. Sure it had Finn questioning if he’s a human or a fighting machine, but “Rouge One” was built around a fresh story.

To be fair, this one doesn’t shy away from reheating leftover elements. Case and point is an android named K-2SO. He’s obviously the C-3PO type who is very knowledgeable despite being the comic relief. Thankfully, Alan Tudyk’s performance saves the character from being a predictable variation making K more open to fighting when needed and hilariously pessimistic. In a way, this bot reminded me of Marvin the Depressed Robot or some kind of creation that only Douglas Adams would delight in.

Like I said, “Rogue One” doesn’t shy away from the bin of “oh, look its this from the other films” or “wow, that answers this.” I can’t begin to describe the amount of Easter eggs and things I’m sure Star Wars fans of old will be overjoyed in. The one I’m most surprised is a CGI recreation of Peter Cushing as Grand Moff Tarkin. I guess now in days you don’t need to hire a new actor with heavy make-up and I should be too shocked considering this same method was done in Tron Legacy to Jeff Bridges. Still, I liked how limitless this movie went when it came to linking itself to the older entry.

When you boil it down, “Rouge One” is hard to talk about without giving away most of the plot details. For fans of old and new, this will certainly be a nice Christmas treat. I know considering how much of a kick I got out of seeing real sets instead of CGI crafted ones, actual planet environments instead of studio built ones and intense battle scenes that challenge or match the charm of the original trilogy. I can’t tell you how much I smiled to see the AT-TA walkers during the big finale. This is a fun ball of nostalgia while also delivering a complex movie about power and fighting back.

Though parents, be fair warned. “Rouge One” is highly recommended not for smaller fans. This is a radically different movie as director Gareth Edwards wanted this to be more like a  war movie and I feel he succeeded. Despite the PG-13 rating, this is packed with many intense battle scenes and shootouts that parents might want to reconsider this as a Christmas gift for their kids. Even bigger of a debate is the ending (which I will try to avoid ruining) as key characters get killed off to which I’m certain will upset some viewers. For alternatives, I suggest taking them to either “Moana” or “Fantastic Beasts.” Both films have a kind charm that are better suited for the holiday. “Rogue One” is a good entry and an improvement over last year’s entry. But what irks me is how it won’t be canon with the new trilogy. Apparently, the idea is to make a series of Star Wars anthology movies that are more in line with the original films. Honestly, I’d more inclined to see them than watch the continuing retreaded adventures of Kylo Ren.

Posted in In Theaters (Sort of), Uncategorized