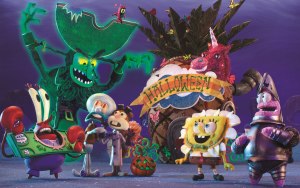 We had some very lackluster Halloween specials this year. Michael Jackson’s Halloween proved to be one of the most head-scratching in years while SNL’s The David S. Pumpkins Halloween Special didn’t really do much for viewers (personally, I thought it was ok.) But between these two, how come no one is talking about the recent Spongebob Squarepants Halloween special? Yeah, of all the things to come out this month, how is it that Nickelodeon’s cartoon about a sea sponge actually got it right? It’s full of Halloween imagery, surrounds itself on the spooky holiday and its all made with stop-motion animation…well, partly, but we’ll get to that.

Spongebob (voice by Tom Kenny) is not a fan of being scared and likes to make merry on the holiday, not understanding the true meaning completely. His buddy neighbor Patrick Star (a starfish voiced by Bill Fragerbakke) manages him to confuse him into thinking the scariness of the holiday is meant to be taken funny. They visit a couple of haunted houses and it causes Spongebob to feel more comfortable with the new found philosophy while laughing all the way. However, the Flying Dutchman (voiced by a hilarious Brian Doyle-Murray) thinks otherwise as he plans to scare the giggly sponge by any means necessary.

I just want to get this out of the way, I friggin’ love the stop-motion animation here. I loved this animation as a kid and I’m still fascinated by it to this day. The studio Screen Novelties, who also did the Christmas special in 2012, do a great job bringing these characters to a three-dimensional state while also fitting in with the nonsensical tone of the show. CGI animation would have been too easy to use as the animation here has a strange charm to it. The animators even go as far to match the strangeness of jokes like a close-up of Patrick’s teeth or the movement of certain characters. I’d arguable say the show’s concept and animation style are an odd match for the two.

Stop-motion itself was always a laborious process, but it really pays off in the end. There’s behind the scenes videos out there showcasing how difficult the animation is while also being a marvel. The sets on the Flying Dutchman’s ship are great to look at and it’s cool to see the undersea world of Bikini Bottom turned into a full dimensional place. Also, there are times when they don’t use animation. Sometimes, they will use live-puppetry for certain effects which is kind of neat. There’s a good mix of hand puppets and wire marionettes which have this near creepy vibe to them. Even famed animator Sally Cruikshank provides a great piece, known for her psychedelically surreal pieces like her short Quasi at the Quackeradero. 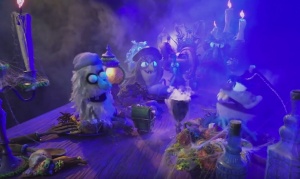 The best highlight for me is easily the “Scare Song” sequence. The Dutchman takes Spongbob and Patrick on this creepy ride which is almost adjacent to Disneyland’s Haunted Mansion. There’s puppet ghosts everywhere, strange creatures running about and at one point, our heroes get launched into a pinball machine. It just literally screams out Halloween every time I see it.

The message of Boo-kini Bottom is that’s its ok to be scared, even when you don’t like it. This comes in very well near the final third and it works well to its advantage. So at least kids will be ok with a nice message about the holiday. For adults, there’s plenty of good visuals and funny jokes along the way. Part of me wishes it was a little longer, but it still has a lot of rewatch value for the 24 mins we get. If your not a fan of the show, that’s fine, but I still recommend checking it out for the technical craft. I honestly can’t think of another modern Halloween special like this. It shows how fun Halloween can be while also presenting some nice tricks and treats.